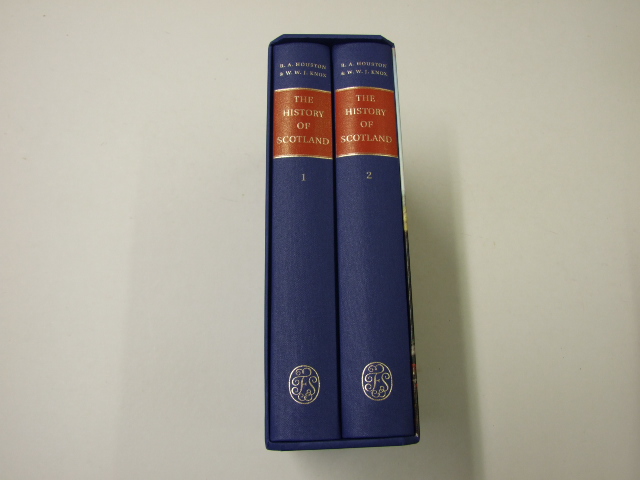 For Sale
The History Of Scotland - From The Earliest Times To The Present Day - 2 volumes
Houston, R A and Knox, W W J
Click to view details

Published in London by Folio Society. 2014. First Thus. 2 Fine Hardbacks. No inscriptions or bookplates. Near Fine slipcase. Slight bumps to the edge of one panel. Introduced by Michael Alpert. The definitive account of a tragic conflict, with more than 100 carefully selected images. The Spanish Civil War. Between 1936 and 1939 the Spanish people were engulfed in a civil war that divided families, destroyed lives and provoked a passionate international debate which still rages today. In this epic account, the eminent historian Hugh Thomas traces every step of the war from its origins in Spain's stagnant social order and fragile democracy to the final defeat of the Republicans by Franco's Nationalists. 'The Spanish Civil War looks magnificent. I am proud to have been associated with this publication by The Folio Society.'. Michael Alpert. The Spanish Civil War book. 2 volumes. Bound in buckram and blocked with a design by Raquel Leis Allion. Printed on Abbey Wove paper. Set in Mentor. 1,080 pages in total. Two frontispieces and 64 pages of plate illustrations. Blocked slipcase. Book size: 9ľ" x 6ľ". A sweeping overview of a brutal conflict. . Shortly after midnight on 17 July 1936, General Francisco Franco boarded a fishing boat and left Tenerife where he had been stationed (or exiled, in his view) for the Spanish mainland. His ostensible reason was to attend a funeral; his real aim was to participate in a right-wing military coup to overthrow the socialist government. The coup failed, with the wealthier northern and eastern regions – particularly Catalonia and the Basque country – holding their own against the rebels. But the government was not strong enough to repress the uprising, and civil war ensued. 'Remarkable … a definitive account'. Sunday Times. Thomas narrates the history of this conflict with impressive insight and even-handedness. He acknowledges the atrocities on both sides, from the murders of clergy and nuns by the Republicans (as the left-wing became known) to the slaughter and imprisonment of entire villages by the Nationalists. Within this sweeping overview Thomas introduces us to key figures such as Dolores Ibarruri, 'La Pasionaria', rumoured by the Right to have cut a priest's throat with her teeth; and General Mola, who instructed the mayors of Navarra to 'spread an atmosphere of terror'. The battles of Madrid and Barcelona and the pitiless bombardments of Guernica and Durango are discussed in all their tragic detail. 'A full, vivid and deeply serious treatment of a great subject'. New York Times Book Review. The Republicans enjoyed the support of international public opinion, with individuals such as George Orwell and Ernest Hemingway joining the International Brigades in order to fight and report on events for the benefit of the wider world. Nevertheless, Thomas shows how the various left-wing groups were hampered by infighting and the reluctance of France and Britain to officially intervene on their side. The Nationalists, on the other hand, steadily gained ground and won important battles due to their military discipline and the support given to them by Nazi Germany and Fascist Italy. With the fall of Catalonia in January 1939, the Republican cause was lost, and European leaders finally acknowledged Franco's government in the following months. Spain would remain neutral during the Second World War, having already had more than its share of what Thomas calls 'the tragic European breakdown of the twentieth century'. 'A prodigy of a book'. Sir Michael Foot. Thomas is one of the most highly respected historians of his generation, and he has been the recipient of numerous international awards. Among other distinctions, he is a commander of the Order of Arts and Letters in France and has received the Grand Cross of the Order of Isabella the Catholic in Spain and the Order of the Aztec Eagle in Mexico. For this edition he has worked closely with the team at The Folio Society in choosing the images, while the editorial team has made careful revisions and amendments to the text and notes where necessary. The 35 maps have been redrawn by cartographer Kevin Freeborn, with added details and improved consistency throughout. In addition to the existing introduction and preface by the author, this edition features a specially commissioned foreword by Professor Michael Alpert, Emeritus Professor of the History of Spain at the University of Westminster. He praises a great work that 'has not been equalled for the clarity, coherence and cogency of its narrative, its detachment and engagement, and its perception and vividness'. Unique images from the archive. Hugh Thomas (born 1931). Hugh Thomas, Baron Thomas of Swynnerton, is a distinguished historian, especially of Spain and Latin America. Educated at Sherborne School, Dorset, and Queens' College, Cambridge, Thomas also attended the Sorbonne. He worked in the Foreign Office from 1954 to 1956, became Professor of History at the University of Reading in 1966, and was chairman of Margaret Thatcher's think tank, the Centre for Policy Studies, in 1979. Later in his career he became a professor of history at both New York University and Boston University. His books include Cuba, or The Pursuit of Freedom (1971); John Strachey (1973); An Unfinished History of the World (1979); Armed Truce (1986); The Slave Trade (1997); Rivers of Gold (2003); Beaumarchais in Seville (2006); The Golden Age (2010); and the forthcoming World Without End. From the Folio Society description. 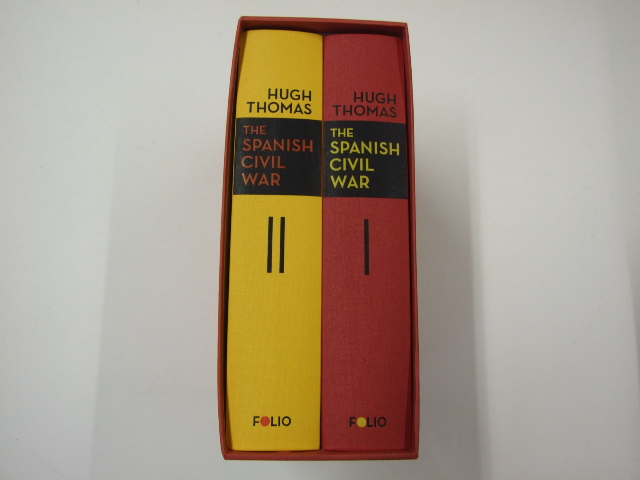